Educated at Simmons College in Boston and City College and Lehman College in New York, Penny Dell was born in Mexico and lived there until she was thirteen. The artist Francisco Dos Amantes and the zoomorphic figures of Aztec friezes influenced her early work. Dell studied art at the Triveni Kala Sangam Akademi in New Delhi as well as other art centers. She was a bi-lingual teacher in the New York City schools. 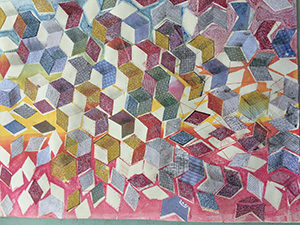 For many years she taught printmaking and cartooning to adults and children at the Old Church Cultural Center in Demarest and at the Art Center of Northern New Jersey in New Milford. She also presented Polaroid and other image transfer  workshops at the Hunterdon Museum, The Printmaking Center, Soho Photo,  Rockland Center for the Arts, and other organizations in the New York metropolitan area.

As the former Director of the Gallery and Special Projects at OCCC, Curator at the Williams Center for the Arts, as well as at the Haworth Municipal Library she put together hundreds of exhibitions.

Her prize-winning prints, hand-made artist’s books and paintings have been exhibited widely, winning numerous prizes. She has been honored with residencies at the Woman’s Studio Workshop in Rosendale NY in 2003 and 2008  and at the Vermont StudioCenter in 2004 and 2008. On the Board of the National Association of Women Artists, she served as President from 2005-2007. 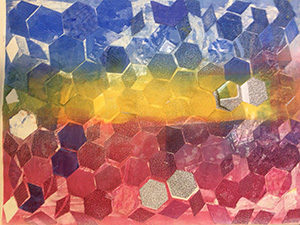 My latest work recycles patterns from the interiors of security envelopes — pattern against pattern. Some are collaged onto woodcut or monoprint backgrounds and integrated into work reminiscent of patchwork quilts.