Join New Deal as they bring this classic novel to the stage. Jay Gatsby, a self-made millionaire, passionately pursues the elusive Daisy Buchanan. Nick Carraway, a young newcomer to Long Island, is drawn into their world of obsession, greed and danger. The breathtaking glamour and decadent excess of the Jazz Age come to the stage in F. Scott Fitzgerald’s classic novel.

Time: Visit the Standing Room Only Theater Company website for showtimes and tickets

Free and Open To The Public. Pre-registration is encouraged. RSVP to bill.jeffway@dchsny.org or call 845-293-7711.

Join the Dutchess County Historical Society at the Cunneen-Hackett Arts Center for the inaugural presentation in the “Women’s Voices and Talents” series – Within These Walls: Voices & Talents of Local Women on the Path to Equality a Century Ago – in the VBI Theater. On display in the Reception Gallery will be the works of Caroline Morgan Clowes, a LaGrange artist who was featured at the 1876 Centennial Celebration in Philadelphia as a member of the Hudson River School of painting.  For more information visit the Dutchess County Historical Society website: https://dchsny.org/2020-01-26/

Time: Visit the From Stage to Screen website for showtimes and tickets

The Drowsy Chaperone presented by From Stage to Screen

For more information visit the From Stage to Screen website: https://fsts.ticketleap.com/

Time: Visit the From Stage to Screen website for showtimes and tickets

Frozen Jr. presented by From Stage to Screen

For more information visit the From Stage to Screen website https://www.fromstagetoscreen.net/

The Sleuth Pro Speaker Series Presents: Toni Blackman, Inspirational Speaker.  A highly respected Howard University-educated artist and social entrepreneur, she is the first Hip-Hop artist to work as a cultural ambassador for the US Dept. of State.  Toni is one of the world’s foremost Hip-Hop activist/consultants working in over 47 countries, touring Africa, Southeast Asia, Europe, Canada, and Brasil.  $15 in advance; $20 at the doorwww.eventbrite.com/e/the-sleuth-pro-speaker-series-featuring-toni-ticket-62824985222toniblackmanpresents.com

“More Sinatra, Big Band Style” will feature The Big Band Sound 25-piece jazz orchestra, including six vocalists and swing dance performers, in a show spotlighting the music of Frank Sinatra and his friends. Frank Sinatra recorded nearly a thousand different songs in his lifetime, which spanned the Golden Age of Popular Music. Sinatra started off singing with the big bands of Harry James and Tommy Dorsey, and he then went on to his spectacular solo career where he was often backed by the big bands of Duke Ellington, Count Basie and others. “More Sinatra, Big Band Style” will highlight the best of those thousand songs: the songs at the core of the Great American Songbook that Frank Sinatra and his friends brought into our lives, all in the most exciting setting of a live big band.

“More Sinatra, Big Band Style” will showcase several songs from Frank Sinatra’s early years travelling with the big bands, including “Polka Dots and Moonbeams” and “Marie”, as well as songs from his peak recording years, including “Strangers in the Night” and “Fly Me to the Moon”, and songs from his later years, including “Theme from New York, New York”. Duets, like those on his albums from the 1990s, will include such classics as “For Once in My Life” and “My Kind of Town”. And, the full range of America’s greatest composers will be covered, including Cole Porter’s “At Long Last Love”, Rodgers and Hart’s “Where or When”, Irving Berlin’s “Let’s Face the Music and Dance”, and the Gershwins’ “Someone to Watch Over Me”.

The Big Band Sound 25-piece jazz orchestra has performed throughout the Hudson Valley for over 40 years and this “More Sinatra” show will continue in the series of “Big Band Style” shows that they have presented the past five summers to great acclaim. This is a follow-up to “Sinatra Sounds, Big Band Style”, which was presented in 2017, and will include more than twenty new selections.

General Admission is $20 and tickets can be purchased in advance at thebigbandsound.com. Proceeds from this show will benefit the Sparrow’s Nest local charity. At last year’s show, $3000 was raised for the charity. Sparrow’s Nest of the Hudson Valley provides meals to the families of caregivers diagnosed with cancer. More information about Sparrow’s Nest can be found at sparrowsnestcharity.org.

June 23, 2019 10:00 Am To 5:00 Pm At The Cunneen-Hackett Arts Center 9 & 12 Vassar Street Poughkeepsie, New York 12601 845-486-4571 https://cunneen-hackett.org You are invited to have your antiques appraised at $10 per item by an experienced appraisal team specializing in fine arts, coins, antiques, religious arts, jewelry, first edition books, newspapers, maps, documents, fine wine, sports memorabilia, comic books, magic cards and other modern games An honoree event from 5:00 PM until 6:30 PM will take place at the Cunneen-Hackett Arts Center for Advertisers, Vendors, Volunteers and Patrons Vendors will be buying and selling at the Antique Fair Food available for purchase This is an event for the whole family We hope to see you there. 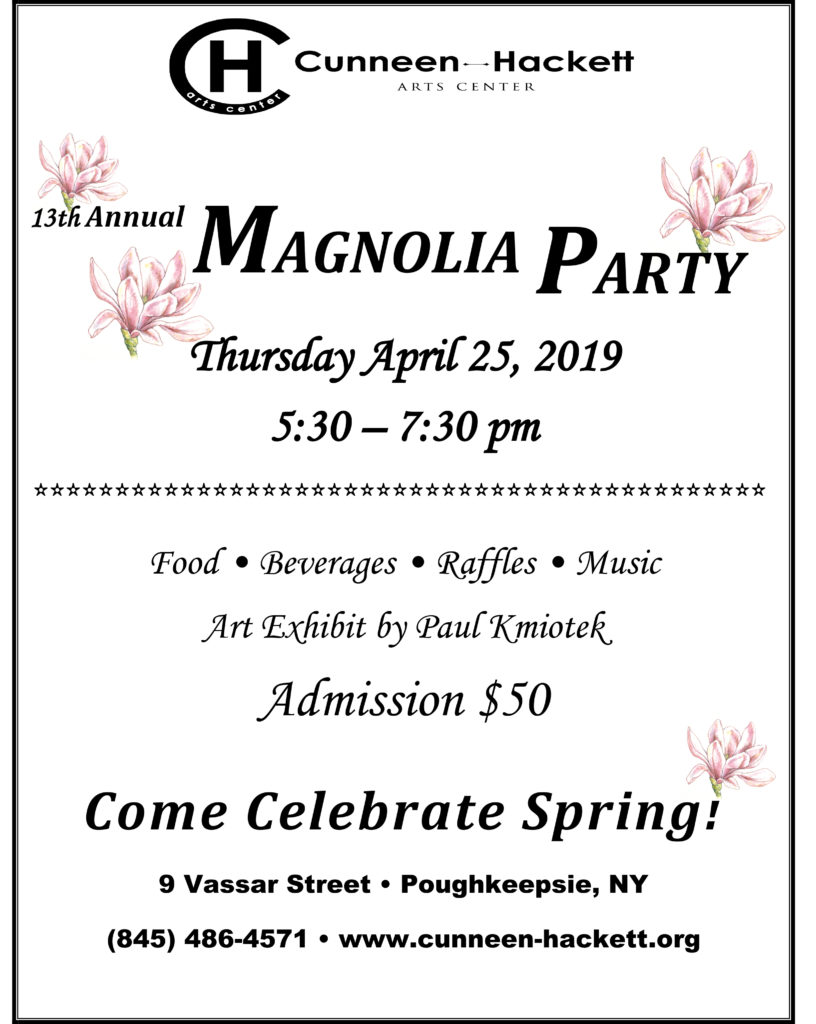 PoughETRY Fest 2019 is a collaboration made possible with funding from Arts Mid-Hudson.  Visit our Youth Open Mic hosted by Derick Cross, LGBTQ Open Mic hosted by Jen Herman, the Calling All Poets Series hosted by Mike Jurkovic, the Poet Laureate room featuring the newly appointed Hudson Valley & beyond Poet Laureates, and the Audre Lorde room Co-curated by Armando Batista. In whatever you choose to partake throughout the day at the festival, we hope you end the night with us for a special Poelodies opening with Poetyc Visionz with the Funk Junkies featuring Dominic Buccellato aka DOM P. and Poet Gold – BGW at PoughETRY Fest 2019. It’s going to be a full day of diverse poetic expression. #poetry#spokenword#poughtential#artsmidhudson#poetgold#dutchesstourism 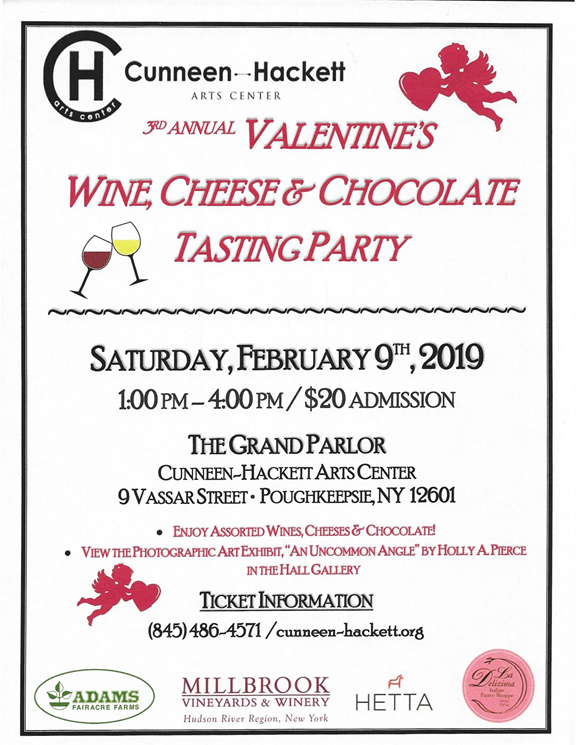 Celebrate the weekend before Valentine’s Day, Saturday February 9th in Cunneen-Hackett Arts Center’s Grand Parlor with a fabulous fundraiser that tempts the taste buds with pairings of a variety of wines, cheeses and chocolate desserts, all while listening to love songs. The warmth and ambiance in our historic parlor is the perfect on a chilly winter’s day. Come join us as we cheer to all that we love.

FROM STAGE TO SCREEN: James & the Giant Peach

Based on one of Roald Dahl’s most poignantly quirky stories, Roald Dahl’s James and the Giant Peach JR. is a brand new take on this “masterpeach” of a tale.  Featuring a wickedly tuneful score and a witty and charming book, this adventurous musical about courage and self-discovery is destined to be a classic.

When James is sent by his conniving aunts to chop down their old fruit tree, he discovers a magic potion that grows a tremendous peach, rolls into the ocean and launches a journey of enormous proportions. James befriends a collection of singing insects that ride the giant piece of fruit across the ocean, facing hunger, sharks and plenty of disagreements along the way.